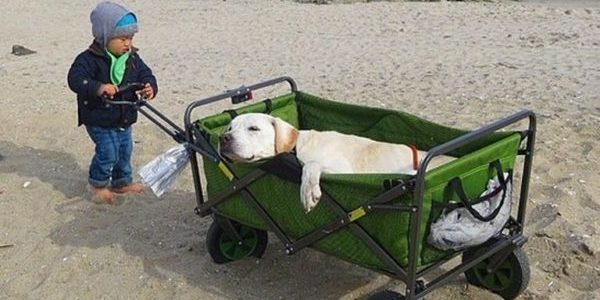 In 1999 Thomas Neil Rodriguez took 8-month-old puppy named Poh from an animal shelter. Curious dog became very important part of the man’s life, but 15 years later he got diagnosed with inoperable tumor. According to the doctors Poh had to live no more than 2 weeks.

Knowing that he’ll lose his friend very soon, Rodriguez decided to spend as much time as possible with Poh and went with him on a tour of US states.

Thomas bought a special wheelchair for the dog, so he could rest during the trip.

Thomas said that Pou has always liked to visit new places. In this situation, he has decided that a journey with his owner will give the dog positive emotions.” Poh has a very strong spirit. On the road, he seemed charged with new energy, “- said Thomas.

“He loves, loves, can not live without … water! You can go anywhere, only one condition – there must be a place where you can swim. In Austin, he climbed into the water at the very top. “

Poh has acquired new friends during the trip.

Instead of planned 2 weeks, their journey lasted seven weeks, and they visited more than 35 US cities. But travelers were forced to return home to New York, because of Poh’s deteriorating health.

After travelling the dog continues to live at home for several weeks. However, loving owner does not let him to get bored, and they make short trips to nearby cities.

Neil Thomas Rodriguez is planning to give his friend new long trips on his own birthday and on the birthday of Poh, which will be in October.

Every living creature need care and love. Dog Poh has had a wonderful life with lots of adventure and travel. And the most importantly he has a loving friend who won’t leave him until the last minute.