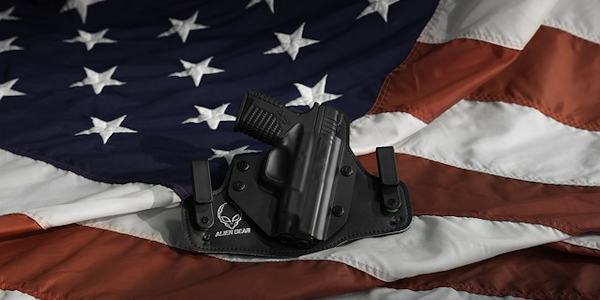 “Red Flag” Gun Confiscation Laws Are Even Worse Than You Think

As I said in this column last week, Republicans Donald Trump, Mitch McConnell, Lindsey Graham and Marco Rubio are joining forces with liberal Democrats to soon enact “red flag” gun confiscation laws. I also reported on the push for the enactment of other gun control measures such as universal background checks being promoted on Capitol Hill and by the White House here.

I urge readers to watch my 8-minute video exposing Donald Trump’s betrayal of his promise to protect the 2nd Amendment and share it with as many of your friends as you can. If we don’t convince our U.S. senators to reject these egregious gun control measures, THEY WILL BE PASSED, AND TRUMP WILL SIGN THEM INTO LAW. We have about two or three weeks to convince our senators to reject these new gun control laws. That’s it.

Please watch the video and share it with everyone you can.

If law-abiding gun owners don’t call their U.S. senators en masse, and I mean posthaste, you are very likely to wake up one morning around 4am to the sound of a SWAT team breaking down your door to confiscate your guns, prepared to kill you or any member of your family who resists. Why? Perhaps because a gun-hating neighbor hates you having guns or a relative doesn’t like you and is looking for any way to “teach you a lesson” or your ex-spouse is looking for any way to “get even” with you or an anti-gun cop with a grudge wants to send a political message or a family doctor or school teacher overheard one of your children talk about how many guns daddy has and became alarmed, etc., ad infinitum.

Plus, the FBI has just recently stated that if you believe in “conspiracy theories,” you are a “domestic terrorist threat.” That statement is from an FBI intelligence bulletin from the bureau’s Phoenix field office, dated May 30, 2019. That FBI designation alone could very easily precipitate a “red flag” gun confiscation order being rendered against you.

And Donald Trump himself recently demonstrated how dangerous “red flag” laws are. In a tweet on August 13, President Trump said,

Would Chris Cuomo be given a Red Flag for his recent rant? Filthy language and a total loss of control. He shouldn’t be allowed to have any weapon. He’s nuts!

Are you paying attention? Donald Trump was threatening to use a “red flag” law to authorize police agencies to take away an American citizen’s Natural God-given right of self-defense simply because Trump didn’t like what the citizen said—about him.

Folks, don’t you see? Those in authority can use “red flag” gun confiscation laws against ANYONE they want and for ANY REASON they want.

In other words, there doesn’t have to be a reason. Under “red flag” laws, all it takes for police to come and seize your guns is for someone to make a “red flag” accusation against you. That’s it. And, yes, it really IS that easy.

The enforcement of “red flag” laws is actually much worse than you think, so says Donald Kilmer, an attorney who has litigated and defended against many state and federal gun charges.

They’re all meant to disarm dangerous people — but they’re all fundamentally flawed.

None of these red flag laws would have prevented recent mass shootings. And in my 23 years practicing law in the heart of Silicon Valley, I have litigated dozens of these cases. I’ve seen firsthand the practical enforcement problems that emerge in real-life cases.

These kinds of court orders are usually obtained from a judge ex parte. That’s fancy Latin for: The judge only hears one side of the story, it is not your side, and you may not even know about it until after the fact. Then they immediately strip you of fundamental constitutional rights for the duration of the orders. You’ll get your “full due process” hearing, but not until later.

And any violation of these orders is separately punishable as a crime. So even if you are innocent of the underlying conduct that inspired the “red flag” order, if you violate the order pending your hearing, you can still face criminal charges.

That kind of situation is ripe for danger. In one situation in Baltimore, police ended up shooting [and killing] a man when they came to collect his guns under a “red flag” law.

To win these hearings, you have to refute an allegation that you pose a danger to yourself or others where a judge already issued a temporary ex parte order that concluded you were already a danger. Many judges will likely err on the side of caution, and against your rights.

As a practical matter, if the government’s interest is in separating a potentially-dangerous person from guns, it makes no sense to leave other guns that belong to family members in the home. So, if you live with someone that gets a red flag order issued against them, then you and others living in the same home risk losing your guns, too.

Even if you win, the judge isn’t going to just hand your guns back to you at the end of the hearing. It’s probably a good idea to “lawyer up” just to go through the process of recovering your guns, so you don’t go to jail or prison for accidentally breaking an obscure firearm law or regulation. You wouldn’t want to set off a red flag.

Law-abiding gun owners better get a big whiff of reality SOON and realize that if they are going to maintain the right to keep and bear arms much longer, THEY must step up to the plate and defend that right—and I mean RIGHT NOW.

The NRA is compromised and is in complete disarray and is offering NO HELP. Donald Trump has already proven he has ZERO fidelity to the 2nd Amendment (or to the rest of the Constitution and Bill of Rights, for that matter). Most Christians and conservatives are in a state of deep denial and hibernation, believing that their yellow-haired savior would never betray them, in spite of the fact that he has already betrayed them—repeatedly.

It is up to individual freedomists and gun owners who are willing to fight for their right to keep and bear arms to fend off this assault against our 2nd Amendment liberties. Reinforcements are not coming; it is up to YOU AND ME.

How much does the 2nd Amendment mean to you? Each of us will determine the answer to that question by what we do or do not do RIGHT NOW.

P.S. I, again, URGE readers to watch my 8-minute video regarding Trump’s betrayal of the 2nd Amendment and the push for the enactment of “red flag” gun confiscation laws and share it with everyone you can. In the video, I also include the phone numbers for both the White House and U.S. Senate, where you can call and voice your opposition.

P.P.S. Here is my video Open Letter To Our Legislator, Judges And Lawmen regarding “red flag” gun confiscation laws. Please watch it and share.