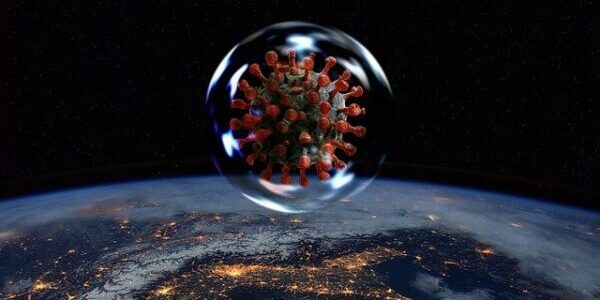 The Fatal Fallout From the Covid Fallacy Has Only Begun

After a year and a half of enduring the world’s greatest medical hoax, we have only begun to experience the fatal fallout from this fanatical fallacy. The calamitous consequences of this planned, programmed “pandemic” have decimated the global economy, ruined untold millions of lives and created the model for totalitarianism for the rest of this century—and it’s just the beginning.

Retail stores—even the big box stores—are just barely hanging on. Grocery stores are operating at about or less than 50% capacity. The same is true for car dealerships and farm equipment retailers. Almost no retailer—including restaurants—has nearly enough employees to serve their patrons. The only reason why any passenger airline is still flying is due to the fact that they are all being underwritten by the Fed. Ditto for hospitals, banks, credit unions and big corporations.

And the only reason we haven’t seen bread lines and poverty riots in the streets of this country is because Uncle Sam is paying people more money to stay home than they could earn at their jobs, which only adds to de-incentivize people from going to work—and thus adds to further destabilization of the economy and to an inevitable bursting of a bubble that will make 2008 look like kindergarten problems.

Covid stimulus payments under Donald Trump and Joe Biden mushroomed federal spending to $4.67 trillion. The federal deficit during May jumped to nearly $2.1 trillion. Hyperinflation has already started. Government-inflated wages are not only contributing to further unemployment and business closings but cannot possibly make up for the exponential rising costs of products.

The people who are purchasing homes at today’s hyper-inflated prices will wake up in the near future to find that they are hopelessly upside down on those purchases and will end up being unable to afford the homes they purchased, which will force even more people out of home ownership (a key vanguard of Liberty).

Millions of Americans, who were hard-working and prosperous before Covid, will find themselves part of the government-dependent welfare class. Millions already have. But the billionaire class increased its wealth exponentially during the past year and added at least nine new members to their super-rich fraternity—all associated with the pharmaceutical industry. Imagine that!

Bill Gates, Anthony (Heil Hitler) Fauci, Mark Zuckerberg and his fellow fascists in Silicon Valley, Donald Trump, Joe Biden, Nancy Pelosi, Mitch McConnell (and other members of Congress), along with the leadership at the CDC, the pharmaceutical giants, medical industry, religious establishment and mainstream media who planned and/or helped promote the phony Covid narrative have committed crimes against humanity. True justice for these would-be tyrants requires public hanging—or at the very minimum, life behind bars.

Here is what one honest, courageous physician recently wrote:

In my opinion, Covid-19 succeeded in breaking my last vestiges of faith in medical scientific research. I cannot believe anything I read. I accept no mainstream facts or figures.

We are told such utter nonsense. For example, the ‘fact’ that vaccination protects against Covid-19 more effectively than having had the disease itself… This is just utter nonsense.

Yet, no one seems remotely bothered by any of this nonsense. The public seems to lap it up, and attack anyone who questions the current narrative. I feel that I am clinging onto a dying religion. The religion of Francis Bacon and the Enlightenment, as set out here:

“Baconian method, methodical observation of facts as a means of studying and interpreting natural phenomena. This essentially empirical method was formulated early in the 17th century by Francis Bacon, an English philosopher, as a scientific substitute for the prevailing systems of thought, which, to his mind, relied all too often on fanciful guessing and the mere citing of authorities to establish truths of science.

“After first dismissing all prejudices and preconceptions, Bacon’s method, as explained in Novum Organum (1620; ‘New Instrument’), consisted of three main steps: first, a description of facts; second, a tabulation, or classification, of those facts into three categories – instances of the presence of the characteristic under investigation, instances of its absence, or instances of its presence in varying degrees; third, the rejection of whatever appears, in the light of these tables, not to be connected with the phenomenon under investigation and the determination of what is connected with it.”

This way of thinking, it seems, lasted from 1620 to 2020. 400 years of immense scientific progress. The age of enlightenment. We are moving back to the prevailing systems of thought… to fanciful guessing and the mere citing of authorities to establish truths of science.

The Dark Ages are returning.

Folks who faithfully follow my work know that I’ve been saying for several years that America has already re-entered a spiritual Dark Ages. It’s only natural that a scientific Dark Ages would follow suit.

Mark this down: The next phase that the global elite who engineered this phony narrative are planning is WAR. War is always Plan A for Western globalists, especially when it comes to distracting people from the crimes the Western elite have committed against their own people and creating a shadow economy for the war profiteers.

All the talk we are now hearing from both Trump and Biden and from both Republicans and Democrats about Covid being a bio-weapon from China will make that country the next monster that Washington, D.C., must pretend to destroy.

Of course, it’s all a façade, as the globalist elite in DC, London and Tel Aviv have been propping up the communist regime from the beginning—and still are. The war with China will be as bogus as America’s War on Terror.

Speaking of the War on Terror, four times as many military lives were lost to suicide than combat since G.W. Bush’s War on Terror began.

The forever wars that the US launched after 9/11 led to a surge in military suicides, a new study claims, with traumatized soldiers taking their own lives as they are repeatedly deployed in conflicts that have no public support.

A new report by Brown University’s Costs of War Project provides a new insight into what many dubbed an epidemic of suicides among the US military. Based on data from the DoD, the VA and secondary sources, the study found that at least four times as many military lives were lost to suicide than to combat in wars launched since the 9/11 terrorist attack.

Since President George W. Bush launched his global War on Terror in 2001, 7,057 service members have been killed in military operations. Over the same period, an estimated 5,116 active-duty personnel died by suicide. Between 2011 and 2020, 1,193 National Guard service members and 1,607 Reserve component service members also took their own lives. The suicide death toll among veterans of those wars was conservatively estimated at 22,261. The numbers total 30,177 – more than four times higher than the combat deaths.

For the past year, I’ve been presenting evidence that the SARS-CoV-2 virus doesn’t exist. It’s never been proven to exist.

Those who claim it does exist have two legs to try to stand on. One: the virus has been isolated (discovered). And two: its genetic sequence has been found.

However, the mainstream scientific definition of “isolated” turns out to mean: “We have the virus in a soup in a dish in a lab. The soup contains all sorts of material. We never extracted the virus from the soup.” In other words, “isolated” means its opposite.

In the soup, in addition to the purported virus, there are human and monkey cells, toxic drugs, chemicals, and other genetic material. When the cells begin to die, researchers assert (with no proof) that the cause of cell-death must be the virus.

Therefore, the virus IS in the soup, and it is deadly.

However, the drugs and chemicals could be killing the cells, and the cells are being starved of nutrients, so that could certainly account for their death.

Bottom line: There is no proof of isolation. It isn’t even close. There is no evidence that the purported virus is in the soup.

Now—to bridge over from this part of the article to the Wuhan lab, gain of function research, tweaking a coronavirus to produce a dangerous entity, we need to know one thing:

Mainstream researchers—virologists, molecular biologists—BELIEVE they are working with a real virus. Most of them certainly believe this. They are married to their fallacious and fantastical processes of proving a given virus exists.

And because they believe, so do politicians and public health officials and military leaders.

Therefore, we could certainly say, if the evidence is convincing, that there has been an effort to ramp up the function of a coronavirus in Wuhan.

But EFFORT and TRYING have nothing to do with the truth.

Based on unproven and untenable beliefs, people have TRIED TO DO all sorts of things. And some of those people have CLAIMED that they SUCCEEDED.

Therefore, it’s really quite easy to see how a) the virus has never been proven to exist and b) some researchers have been trying to ramp up the function of a fantasy they call a virus.

“But…but if the virus doesn’t exist, what are these researchers in their lab in Wuhan doing? What are they working with? What’s going on?”

The Wuhan lab, intentionally or unintentionally, becomes a cover story that obscures the truth.

My friends, the fatal fallout from the Covid fallacy has only begun.

Published in BUSINESS, HEALTH, LIBERTY and US