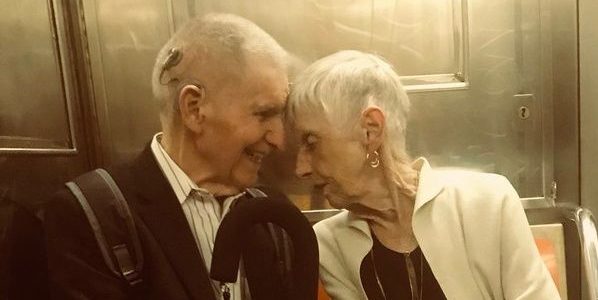 Blake Ricker is a nurse from New York. Once, when he was traveling on the metro, he saw an unusual couple sitting next to him. The elderly man and woman were sitting bowing to each other without hiding their feelings.

The young man decided to take a photo of that lovely couple.

After a while Blake was looking through the photos on his smartphone and found the picture of the elderly couple. This photo touched his heart and the young man wanted to find that elderly couple to give this picture as a gift to them.

Blake posted the photo on Twitter asking people to help him find the elderly couple. The post got 21 thousand likes and 9 thousand reposts. People actively took part in the search for the couple.

At first the searches did not yield results. But after 8 days the girl named Karen wrote to Blake. She turned out to be the daughter-in-law of that couple. The girl said that the elderly people have been together for 64 years and their relationship has always been as great as on this photo.

Karen said that her family is worried for the elderly couple and was always against their travelling on subway. But the old people are willful.

This photo of the elderly couple became viral and many people would like to know their love history. But the elderly did not want publicity and did not disclose the details of their lives.

Perhaps the comments would be superfluous here. Only true love can make it possible for people to preserve so much tenderness after 64 years of marriage.