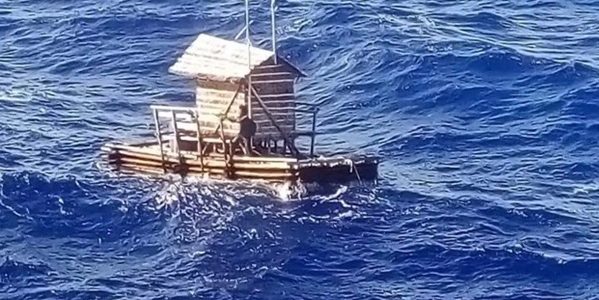 The Young Man Spent 49 Days Drifting In The Ocean. When He Was Ready To Say Goodbye To His Life, A Miracle Happened

Aldi Novela Adilana is an Indonesian teenager whose story became known around the world.

Since the age of 16 Aldi was working on the “rompong”, which is a traditional Indonesian floating fishing hut.

Aldi’s duties included maintaining the hut and keeping the light on to attract fish. Rompong was 125 km from the shore. Once a week employees of the fishing company were sailing to Aldi’s hut to take away the catch and to bring coal, food, water to the young man.

In the middle of July there was a strong storm, as a result of which the hut of Aldi was carried away to the open ocean.

The hut had a supply of food and water, but it quickly ended. In order to survive, the young man was forced to drink salt water and fish.

To make the water less salty, the young man was filtering it through clothes. And for cooking fish he was burning the pieces of the hut.

In the open ocean Aldi spent 49 days. All this time he was reading the Bible and praying to God for salvation.

When Aldi got very weak, he was seen by the crew of the passing by ship under the flag of Panama, and was delivered to the hospital by them. 8 Days later he was transferred to the Indonesian consulate, where his flight home was organized.

Only on September 8 Aldi’s parents were able to meet with their son.

Today Aldi feels well. There is no answer yet if he will return to his previous job.