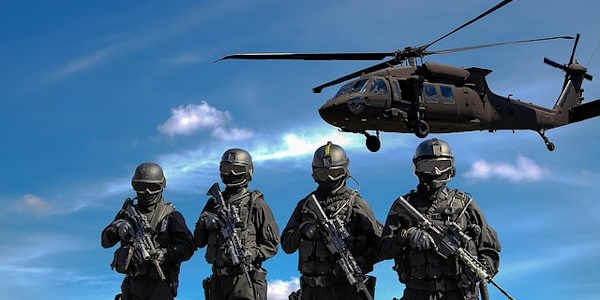 The War Party Is At It Again

Trade a Democrat for a Republican; trade a liberal for a conservative: It doesn’t matter. The War Party remains in charge either way. The people who thought they were voting for Donald Trump because he would extricate America from these endless foreign wars should realize by now that he is just another wuss for the War Party.

Now Trump is sending 1,000 troops to Russia’s border in Poland. He is sending an additional 1,000 troops (the real number could be 5 or 10 times that) to the Middle East. What most of us are not hearing reported is that Defense Secretary Patrick Shanahan (CFR) told top national security aides that the Pentagon has plans to send 120,000 U.S. troops to the Middle East. Coincidentally, this is the exact same number of U.S. forces that were used in the invasion of Iraq.

Trump has already sent nuclear-capable B-52 bombers to the Middle East. He has sent the USS Abraham Lincoln carrier strike group to the Middle East. He is sending U.S. warships to the tip of China’s territorial waters. He is sending U.S. military jets and bombers to the tip of Russia’s airspace. He is threatening overt war with Venezuela, Nicaragua, Cuba and Iran. At least 5,000 U.S. troops have been rushed to Venezuela’s border-neighbor, Colombia.

In addition, Trump has issued economic sanctions against India, Mexico, Turkey, the European Union (with 28 member states) and, of course, China, Russia, Venezuela and Iran. For anyone who understands the way sanctions work, each of these sanctions, by themselves, could rightly be considered as an act of war. Hundreds of thousands (maybe millions) of little children, elderly people, the sick and infirmed, etc., are right now starving to death all over the world as a direct result of Trump’s economic sanctions against their countries. Mr. Trump, have you ever seen a child starve to death?

It is no hyperbole to say that Donald Trump sees himself as an emperor, not a president. And Trump is not shy about admitting it. In his recent ABC interview with George Stephanopoulos, Trump bellowed, “I run the country.”

It seems that America’s founders went to a lot of trouble for nothing to create a constitutional republic, because, with the help of evangelical Christians and conservative Republicans, Donald Trump is rapidly—and I do mean rapidly—turning America into a monarchy. But in reality,Trump is more of a mafia don than a monarch. And why not? Trump spent his entire business career learning how to skirt the law, truth, decency, honesty and all things upright from the best cons, killers and thugs in the business: Zionist mafia bosses. And Trump is now their star pupil.

Donald Trump is the consummate Zionist stooge. He has bewitched Christians and conservatives with his phony religious rhetoric and overt pandering to Israel. Of course, Christians were already poised and ready for a deceiver like Trump to come along. Ever since the end of World War II, America’s evangelical churches have dispensed the devilish and diabolical doctrines of dispensational futurism, which turned them into willing vassals of all things Israel.

As an aside, Shanahan caught everyone off guard when he announced last Tuesday that he was leaving the Pentagon. The timing of his departure is most curious. Why would a defense secretary leave his post just as Donald Trump is on the verge of launching at least two wars? There is something significant behind this move. But don’t worry, folks, Trump is replacing Shanahan with another CFR Zionist warmonger, now former secretary of the Army, Mark Esper. But I digress.

America’s penchant for starting wars [is] very often based upon lies or false premises. False flag operations mean having an attack blamed upon another nation which actually was not the culprit. Syria’s questionable fault for gassing of innocent civilians was used by Washington to bomb its Air Force. Now Secretary of State Pompeo has set us up by publicly stating that any attack on any American soldier in Iraq or Syria would cause America to attack Iran. He’s put every soldier at risk of death by some Israeli or Saudi fanatic.

Both Secretary of State Pompeo and Vice President Pence are profound end times Evangelicals [translate: Israel-based dispensational futurists]. In 2017 I wrote, Iraq, Syria, Iran…Are We To Destroy Iran Next? about the original neo-conservative program to re-mold the Middle East. A main new concern is Trump’s Secretary of State’s strong evangelical beliefs in the end times. The NY Times describes his beliefs [in] The Rapture and the Real World: Pompeo Blends Belief and Policy. The belief is that a stronger and greater Israel will bring about Armageddon sooner and their rapture straight to heaven.

Destroying Iran’s being a threat to Israel is thus seen as helping God’s intentions.

The FT also links to a Guardian article quoting Pompeo, “Pompeo told a church congregation in Wichita three years ago. “It is a never-ending struggle . . . until the rapture. Be a part of it. Be in the fight.” Pompeo’s actions as a “Christian Zionist” are described in a New Republic article The Christianization of US Foreign Policy.

I know what they were trying to say, but the New Republic article titled The Christianization of US Foreign Policy is badly misnamed. What it should be called is The Judaization of US Foreign Policy, because, for the most part, evangelical Christianity in the U.S. has been completely co-opted by Zionist-Judaism (which is not Judaism at all, but a political/racial supremacist ideology that uses war to force its will upon any country that opposes it).

On May 25th Vice President Mike Pence was the featured speaker at the United States Military Academy commencement. His speech was predictably an encomium celebrating both the diversity and the success of the newly commissioned officers as well as of the system at West Point that had produced them, but it also included interesting insights into how he and the other non-veterans who dominate the policy making in the White House see the military.

Pence’s choice of words is revealing. There is a “virtual certainty” of “fight[ing] on a battlefield for America” and that battlefield is global, including both transnational Islamic terrorism and the western hemisphere. The language implies that American security requires “full spectrum dominance” everywhere. It encompasses traditional national enemies, with a Pyongyang that “threatens peace,” a China that is “militarized,” and a Russia that is both “aggressive” and expansionistic. The soldiers must be prepared to fight “when not if that day comes.”

First of all, it is discouraging to note that Pence believes that a war or wars must take place, and further, one must have to wonder exactly what scenarios are envisioned by Pence, and also presumably by his boss and colleagues, regarding precisely how war against other nuclear powers will play out. Nor does he entertain what would happen when the rest of the world begins to perceive the United States as its enemy due to its willingness to interfere in everyone’s politics. And the American soldiers would die not knowing what they were fighting for, since they would understand from the onset that it had nothing to do with the defense of the United States.

The speech is, in short, a recognition that the Trump Administration sees perpetual war on the horizon, a viewpoint that is particularly alarming as one can quite easily make the case that the United States is not seriously threatened at all by anyone on Pence’s enemies list and is therefore the aggressor. China is a regional power, Russia does not have the resources or will to reestablish the Soviet Union, and North Korea has only limited capability to attack anyone, even if it should choose to do so. Islamic terrorism is largely a creation of the United States in the first place and maintains its potency by the adverse impact of the continued US presence in Muslim lands. And the suggestion that Venezuela and/or Cuba might be a threat to America is, quite frankly, laughable.

If Mike Pence is seriously interested in looking around to see who has been most interested in starting new wars, he should look to gentlemen named Bush and Obama, not to mention his own colleagues John Bolton and Mike Pompeo. And then there are Washington’s feckless allies Israel and Saudi Arabia, who are keen to advance their own interests by means of piles of dead American soldiers.

As I said, trade a Democrat for a Republican; trade a liberal for a conservative: It doesn’t matter. The War Party remains in charge either way.

Here’s one more example: The only current presidential candidate of either party that is truly anti-war is Hawaii Congresswoman Tulsi Gabbard. Tulsi is a four-term congresswoman and a combat veteran of the Iraq War. Again, Philip Giraldi has the story:

In a recent interview with Fox News’s Tucker Carlson, Gabbard doubled down on her anti-war credentials, telling the host that war with Iran would be “devastating,” adding that “I know where this path leads us and I’m concerned because the American people don’t seem to be prepared for how devastating and costly such a war would be… So, what we are facing is, essentially, a war that has no frontlines, total chaos, engulfs the whole region, is not contained within Iran or Iraq but would extend to Syria and Lebanon and Israel across the region, setting us up in a situation where, in Iraq, we lost over 4,000 of my brothers and sisters in uniform. A war with Iran would take far more American lives, it would cost more civilian lives across the region… Not to speak of the fact that this would cost trillions of taxpayer dollars coming out of our pockets to go and pay for this endless war that begs the question as a soldier, what are we fighting for? What does victory look like? What is the mission?”

Due to her strong anti-war convictions, Gabbard is being savagely attacked by her own Democrat Party and is being all but totally censored by the mainstream media.

As I have said over and over: There is only one party in Washington, D.C., and it’s the War Party. And they are at it again.

P.S. This is the second notice that we are currently printing and distributing the most important liberty documents in U.S. history. It’s calledTHE FREEDOM DOCUMENTS.

This giant book is an excellent resource for high school and college students—as well as homeschoolers. Pastors, teachers, physicians, business owners, attorneys and judges have purchased THE FREEDOM DOCUMENTS with extreme satisfaction.

The Tennessee State Supreme Court ordered several copies of THE FREEDOM DOCUMENTS. Plus, a county sheriff recently ordered copies for each of his deputies. I believe you will be just as pleased as they are with this wonderful compilation of American documents.

You can have these great documents at your fingertips in one beautifully bound, easy-to-read format. These are the documents that gave birth to the greatest free nation on earth. Again, nowhere else can you find these documents complete in one volume under one title. And our supply is very limited and will not last long.