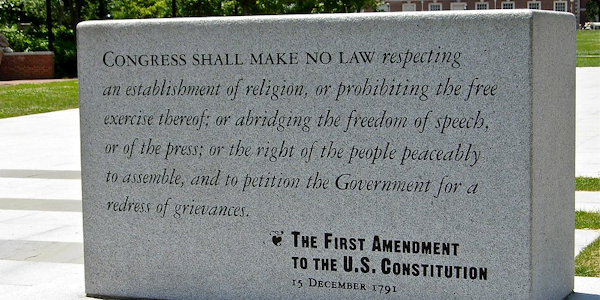 The Murder of the First Amendment

The illegal and unwarranted prosecution of Julian Assange by the US Government in a British court, if court it is and not a Star Chamber, is in fact the prosecution of the First Amendment. It will prevent journalists in the future from informing the public of criminal activity by government. This is already the case in a number of countries, and the US and UK are about to join them.  Washington, working through a British judge and a British prosecutor, is murdering the First Amendment and, thereby, accountable government.

The US government’s case for Assange’s extradition to the US that is working its way through a CIA-suborned British court redefines journalists who hold government accountable as spies.  In other words, journalists who reveal criminal actions of governments are quilty of espionage.  If this were in fact the case, the New York Times would have been prosecuted for publishing the Pentagon Papers.

Once upon a time when law still ruled a person had to spy on his own country in order to have committed a crime.  Julian Assange is an Australian citizen, but he is accused of  committing espionage against the United States while living in Europe.  If this were a crime under law, all the Israeli Mossad spies spying on the United States would be arrested and treated as Assange.  Indeed, all spies of all countries spying on other countries, including the CIA and the British MI6, could be arrested and tried for espionage in the countries that they are spying on. Generally speaking, countries prosecute their own citizens who spy on their own country for foreign governments, but send foreign spies caught spying on them home ( https://slate.com/news-and-politics/2010/07/why-doesn-t-the-fbi-prosecute-more-spies.html ).

In other words, both the US and British governments are hypocrites and lawless.  As the Australian government is just another Washington puppet state, Australia has done nothing to protect its citizen from false prosecution.

Neither have the journalists whose profession is being destroyed by the illegal prosecution of Assange.  What is happening to Assange is worse than a Stalnist show trial, but no presstitute has raised a voice.

Journalists long ago ceased to be journalists and became propagandists for the CIA and the ruling elites.  What little independence American journalism ever had was destroyed by the Clinton regime’s acquiescence to the concentration of 90% of the US media in six hands.  Many books have been written exposing the CIA’s influence over the prestige US media since 1950, and Udo Ulfkotte exposed the CIA’s control over the European media.  British newspapers, such as the Guardian, guard the intelligence agencies and ruling elites.

There is no legal basis for Assange’s prosecution.  He is prosecuted for one reason only: to make it clear to journalists that the First Amendment is dead and their profession along with it.

For those who are not journalists, it means that Justice is dead.  Assange’s extradiction hearing is clearly not being run by a British court but by Washington.  What evidence can be presented is determined by Washington.  The judge, in my opinion a puppet of the intelligence services, and the prosecutor, another puppet devoid, in my opinion, of an ounce of integrity, have done more to prevent justice than Vyshinsky did in the Stalinist show trial of Nikolai Bukharin.

All great evil, such as is being practiced against Julian Assange, has unintended consequences.  What the US and UK are doing is digging their own graves as democracies.  They are transforming themselves into tyrannies.  For freedom, the world will henceforth look to Russia and China.

Craig Murray, a former British ambassador and one of the few people of integrity who have served in the British government in the past half century, has been covering the Assange Show Trial.  This is from his report of Day 14:

“I am very concerned about the obvious collusion of the prosecution and the judge to close this case down. The extraordinary conflation of “time management” and excluding evidence which the US Government does not want heard in public is plainly illegitimate. The continual chivvying and interruption of defence counsel in examination when prosecution counsel are allowed endless repetition amounting to harassment and bullying is illegitimate. Some extraordinarily long prosecution cross-examinations, such as that of Carey Shenkman the lawyer, have every appearance of deliberate time wasting and distraction.” http://www.informationclearinghouse.info/55615.htm

There are so many things that need protesting.  But what are the protests about?  They are about a nonexistent “systemic white racism” and the falsely alleged murder by police officers doing their duty of a felon, George Floyd, who killed himself with an overdose of fentanyl ( https://www.paulcraigroberts.org/2020/07/06/did-george-floyd-die-from-an-overdose-of-fentanyl-or-from-homicide/ ).

Billions of dollars of businesses have been looted and burned because Democrat local and state governments would not permit police to halt the destruction.  The crimes committed by these Democrat mayors and governors are enormous, but no action is taken against them.

Instead, a journalist who told the truth has been under restraint for years and tortured.  Now he is being subjected to a show trial under the guise of an extradition hearing. It is obvious to everyone that the British “court” is acting for Washington and that Assange’s exradiction will be regarded as a sign that he is guilty as charged. No American jury would dare find him innocent.

No one in the US or British or Australian government and media other than a few of the caliber of John Pilger and Craig Murray has the integrity and decency to denounce the trial of Assange as a murderous assault on the First Amendment. The presstitute media donned their CIA cleats and jumped on Assange with both feet, serving as amplifiers for the false charges of Russian spy alleged against an honest journalist. In other words, dumbshit ”prestige” journalists are helping government criminalize journalism.

Assange faces life imprisonment for allegedly leaking documents, some of which had security classification, despite the fact that journalists have always had the right to publish leaks regardless of their classification. The Pentagon Papers were classified, and the New York Times published them.

Moreover, as was established in the 14th day of Assange’s extradiction hearing, it wasn’t Wikileaks that first released the encryption key and location of the leaked documents.  It was The Guardian and David Leigh (see the account here: (http://www.informationclearinghouse.info/55615.htm ).

Therefore, it is David Leigh, not Julian Assange, who is responsible for what Washington regards as a crime. Not only does Washington have an illegitimate case, it has the wrong man in the dock.

This is par course for Washington and explains why Washington is no longer respected in the world even among its European vassals.

The question that we need to ask ourselves, and the question that President Trump needs to ask himself, is why is Trump supporting the fabricated case of the corrupt Obama regime against Julian Assange.  Is the answer that Trump feels that he cannot go against the wishes of the military/security complex when he faces the prospect of a color revolution to overturn his reelection?  Will Julian Assange be another Democrat victim like the countless business men and women whose undefended businesses and livelihoods were burned and looted because Democrats would not defend property from thugs whose cause they champion?

Published in CULTURE, LIBERTY, US and WORLD