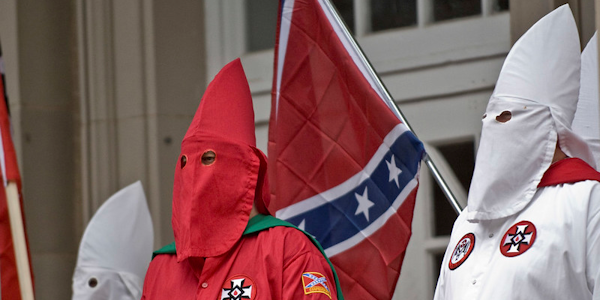 The KKK is widely understood as an institution that symbolizes white racial hatred of blacks, hatred slaked by lynching blacks.  End of story.

The KKK did not originate as a racist organization. It was a resistance movement during the punitive period of Reconstruction when northerners stole property from southerners, imposed black governments and denied whites self-rule, and encouraged blacks to rape southern women as a way of humiliating southern men and women. The KKK was the response of people who had had enough.

The federal government ended Reconstruction because the ruling Republicans who had imposed the punitive measures on the South realized that abuses were producing a guerrilla movement.  The KKK faded away with Reconstruction’s repeal.

In 1915 primarily in response to too much rapid change, too much immigration, too much super patriotism and fear of foreigners the Klan was reborn. The Klan’s target was not blacks so much as change. To prevent unwelcome change, power had to be pried out of the hands of the ruling elite.  Many millions of immigrants from southern and eastern Europe of different religion, habits, and appearance moved into the cities between 1900 and 1915, changing the distribution of the population from rural to city. President Wilson’s propaganda during the First World War demanded 100% Americanism.  German-Americans became victims and some were lynched. The sedition Act was passed. The length of women’s skirts rising from the floor to the knee signified a decline in sexual morality. A resulting disdain for elites, intellectuals and cities resulted in intolerance toward Catholics, Jews, blacks, and foreigners. The Klan saw itself as an anchor of stability. It would clean up movies and literature, deal with bootleggers, prostitutes, and other corrupters of public morality, and restore chivalry and deference to women. To reduce the confusion of a deracinating period to “white racism” is an ahistorical response.

But that is what the falsification of history has produced. The entirety of American history has been reduced to racism.  One consequence is the multi-city riots, burnings, and looting of the George Floyd protests.  The white liberal response  to rioting and looting has been to uncork the genie by justifying the violence committed by blacks against society. There will be more violence to come.

In our time Antifa and white liberals in the universities preach hatred against white people more effectively than Klan organizer Joseph Camp preached hatred toward black people in the Mississippi Delta. The blacks understood the threat.  The whites don’t and fall in with it–“Western civ has to go.”

In the post-Reconstruction era, lower class politicians saw in the numerous poor whites electoral power against the ruling elites. The easiest way to organize them was to turn them against blacks.  Demagogues spread false news and used democracy as the tool to overthrow the aristocratic order and install themselves in its place.  In this sense racism was a product of democratic politics.

Upper class southern whites were not racists and resisted the Klan. The planters understood the worth of a black labor force.  Southern aristocrats such as Le Roy Percy fought the Klan in the Mississippi Delta and kept it at bay.  Percy insisted that black people be respected, fairly paid, and protected by law.

Percy thought that despite his power, he could only conduct a holding operation. He saw the resurrection of the Klan as “a reflection of the fading away of the old aristocracy of the South, which with its many faults and weaknesses is yet far and away the best thing the South has yet produced. In the olden days as gentlemen we were something of a success. In the latter days as money seekers we are sorrowful figures in the competition with the more highly trained brains of the East and the more virile and unscrupulous products of the West.”  The power of civilized men was waning.  Their replacements would be violent and unscrupulous men.  Giuseppe Di Lamperdusa had come to the same conclusion about the demise of the Italian nobility (https://www.amazon.com/Leopard-Novel-Giuseppe-Lampedusa/dp/0375714790/ref=sr_1_1?dchild=1&keywords=The+Leopard&qid=1592661663&s=books&sr=1-1 ).

Percy’s steadfastness paid off. The Klan obtained control over city and  state governments from Portland, Maine to Portland, Oregon, including Indianapolis and the state of Colorado,   but Percy, a white Southern aristocrat defeated them in the Mississippi Delta. Black people praised his leadership and said they had no better champion.

Nationwide the Klan collapsed in the late 1920s, a victim of its own unscrupulousness.   Under its poor leadership the KKK became a money-making scheme selling memberships and regalia.  Fights over money revealed corruption and embarrassed the members. After fomenting racism in order to obtain political power, the Klan was unable to lead and declined as rapidly as it had resurrected.

In America today some truth is so difficult and risky to tell  that the telling has to be worked into the story of a different subject. John Barry used his history of the Mississippi River for his vehicle. In the end truth could be used against the Klan.  Can truth be used against the falsification of white history today? Or will the modern day KKK–Antifa, white liberal professors, and the New York Times–prevail?