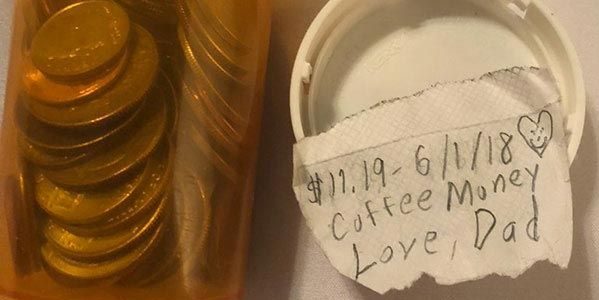 In 1981 Jim Porterfield got hit by a drunk driver, while he was walking to work. For six weeks the man was in a coma, and the doctors did not give any hope that he would live. However, the Lord made a miracle. Despite 13 operations, numerous fractures, infection and trauma of frontal lobe of the brain, Jim survived. Of course, the accident greatly affected his health. With constant pain and disability, Jim worked in the office for another 30 years and also became the father of four children.

The story of Jim Porterfield became known all over the world thanks to his daughter Morgan. The girl made a post on Twitter that did not leave network users indifferent.

The girl wrote about the tragedy that occurred to her father in 1981. She also told that recently Jim was dismissed from his work and can not find another because of his state of health.

A month ago, Morgan noticed that her dad began to put aside his pocket money. When he got enough money to fill with it a medicine bottle, he gave it to his daughter as a gift and left a note: “11 dollars 19 cents, 1.06.18 Money for coffee. With love, Dad.”

When Morgan returned home, she found a bottle of coins and a note in her room. She could hold back her tears. This was the most precious gift she had ever received in her life.

People who read this story were touched to the core. They advised Morgan to organize a fundraizing for her father on the Go Fund Me website. Only in 3 days people donated 9,000 $. This money was enough to cover Jim’s medical bills.