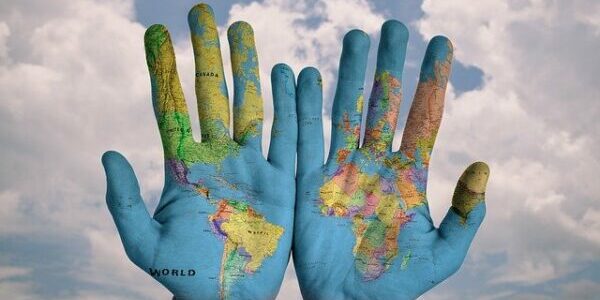 The Fate of the Peoples of the World

This article is not about global warming, nuclear war, Covid or some other plague orchestrated or real.  It is about the confidence of peoples of the world.

Of all the peoples the white ethnicities of the Western World have the poorest outlook.  The reason is the white peoples have lost confidence from decades of indoctrination against themselves by white intellectuals and Jewish cultural Marxists.  Today the governments in the US, Canada, UK, and Western Europe give preference to people of color, including illegal immigrants, over the native born white ethnicities who are facing replacement in their own countries.  As long ago as the 1970s Jean Raspail could see the collapse in white confidence and told its consequences in his novel, The Camp of the Saints.  The novel is so correctly descriptive of our time that the novel is essentially banned from public discussion, and the demonization of Raspail is underway.

In the US the Civil Rights Act of 1964 was passed in order to provide legal enforcement to the 14th Amendment to the Constitution that guarantees equal protection of the laws. The language of the legislation specifically prohibits favoring or inhibiting any race or gender with quotas.  Nevertheless, the law was violated by the regulatory authority, and a system of racial privileges for blacks was forced on universities, employers, and the population.  Less qualified blacks were given preference over more qualified whites in university admissions, employment and promotion. Freezes are used against white admissions, employment, and  promotion until racial balance is achieved.  There have been many adverse consequences such as a decline in educational standards [see for example, https://www.rt.com/usa/521986-virginia-cancels-racist-math/ ], decline in work performance and supervisor authority over black employees as any disciplinary issue can be turned into a racism issue.  Firing a black simply sets back the company’s efforts to achieve racial balance and is likely to cause problems for the supervisor.

But the main adverse consequence has been to convince blacks that they are entitled because they suffered from racism.  The facts that whites are entitling them is understood as white admission that blacks suffer from past abuse.  In other words, white people have officially admitted their guilt and are making restitution by turning themselves into second class citizens.

Consequently, the restitution demands are rising.  There are demands that black votes must be counted twice to make up for slavery that ended 156 years ago.  White culture, not merely its statues, murials, music, and art, but white history itself must be pulled down and destroyed.  Museums are closed. Critical race theory is taught to school children in order to brainwash them against themselves and reduce them to an ineffectual opposition to their demotion to second class citizen [see: https://www.paulcraigroberts.org/2021/04/24/teacher-fired-from-elite-nyc-school-for-defending-white-students-from-demonization/].  The indoctrination has been so successful that the Antifa and Black Lives Matter mobs are filled with white ethnicities, and white school children, despite parental protest, are routinely taught that they are systemic racists.  White employees of corporations, US government including the military, and universities are required to attend racial sensitivity training in which it is made clear that holding a black person accountable is racist.

By constantly emphasizing the deaths of blacks at the hands of police and never reporting the larger number of whites who die at the hands of police, the national media intentionally created the impression among blacks that police kill blacks for racial motives. These feelings were hyped to a level that a video reflecting camera perspective bias, which made it look as if police officer Chauvin had a knee on George Floyd’s neck while Floyd complained that he couldn’t breathe, was all that was required to convict an innocent man.  This video was shown repeatedly for weeks nationally and polluted every jury pool.  Chauvin went to trial already convicted.  The real evidence—that Chauvin complained of breathing difficulty prior to any restraint, that Floyd had three times the deadly dose of fentanyl in his blood. That fentanyl kills by stopping breathing, and that the close up police videos showed that Chauvin’s knee was on Floyd’s shoulder blade, not on his neck—played no part in the jury’s verdict.  Indeed, as the world had not been shown repeatedly the police video during the weeks leading up to the trial, no one would have accepted a verdict of innocence, which is what the actual evidence demanded.

The American establishment was relieved that an innocent man was convicted, because the establishment believes that Chauvin’s conviction will convince the blacks that the justice system is not racist and the mobs will stop burning and looting the business districts of Democrat governed cities. This is a naive hope.

The blacks have learned that they are unaccountable and police are accountable. Violence works for blacks, but not for police.  The police have seen that there was far more public support for the black criminal Floyd than for the white police officer Chauvin. If police are rational, they are going to protect themselves.  That will mean reluctance and refusal to respond to black crime.  Everyone is going to suffer, but black neighborhoods will suffer the most. They will be without police protection.

In Europe the situation is the same.  For the British and major European countries colonialism takes the place of slavery, and in addition to African blacks, the countries are also flooded with Arabs, Indians, and Pakistanis.  In the European press the race of the suspect is not mentioned unless the suspect is white. In Sweden and Germany, the police are unfriendly to rape reports by white women if the rapist is a person of color, because the rising crime that is the result of the open borders policy of the ruling parties is contrary to the ruling parties’ interests.

Of all the white European ethnicities the German people have the worst outlook.  In the United States it was the white liberals and Jewish cultural Marxists who destroyed white confidence. In Germany it was the American/British/Soviet demonization of the Third Reich and the postwar takeover of German education by the Americans that destroyed the confidence of the German people. Washington and its postwar German puppet governments have in place  laws that make any defense, or even any impartial analysis, of the Third Reich impossible. World War II war propaganda and the Zionist story of Holocaust have shamed Germany out of Germans.  Essentially, they are a people, like Americans are coming to be, who are ashamed of their country.  Such a people cannot defend themselves.

Let’s look at one more country—Russia.  Russia’s president, Putin, is demonized throughout the West— the “new Hitler” according to Hillary Clinton, “a killer,” according to the election thief in the White House.  Russia is falsely accused of all sorts of crimes—the downing of the Malaysian airliner, the poisoning of the Skripals and Nalvany, invasions of Ukraine and Georgia, accusations made by the US and its NATO vassals who together have destroyed seven countries and millions of people in “bringing democracy to their countries” with bombs and mass murders of civilians.

One would think that the obvious lies against Russia and the obvious crimes against humanity by Washington and its puppets would leave Russia with the moral high ground.  But it doesn’t. Why?  The answer is that the Russian academic and intellectual class was brainwashed by the Americans during the Yeltsin era when the Soviet/Russian empire was dissolved by Washington.  Consequently, Russian academics and intellectuals, especially those in international relations and economics, have at least one foot in the West.  The West is where they want to be, because they have delusions about the West.  Their naive delusions make them effecively a fifth column for Washington.

It is easy to understand how they came by these delusions. In the Soviet era, especially the earlier part, it was dangerous to be a dissenter. Even  Solzhenitsyn was sent to the Gulag. After Khruschchev loosen things up, intellectuals could express themselves more freely, but the oppressiveness of the Soviet system on free thought was a sore point. The image of a “free America” still resonates, despite its falsity, in the heads of Russian professors.  Today in America is it far more dangerous to dissent from the official narrative than it is in Russia or even in China.  Essentially, in American free thought is dead, suppressed as it is by the print, TV, radio, and digital gatekeepers and by the universities which are reconstructing American history and society with white guilt and wokism.

Despite Russia’s intellectual/academic deluded fifth column, Russia is in a stronger position than the US and Europe.  In the US and Europe the emphasis is on deconstructing the history and culture of the countries and replacing it with diversity and multiculturalism. In other words, the West is being turned into a Tower of Babel.

But in Russia the situation is different. In his address to the Federal Assembly, Putin said:

“It is very important that our young people should look to and be inspired by the achievements and victories of our outstanding ancestors and contemporaries, by their love for our Motherland and aspiration to make a personal contribution to its development.”

So Americans and their NATO vassals are taught to hate their countries, and Russians are taught to love Russia.  In a conflict between Russia and the morally decadent West filled with self-hate, it is obvious who will win.