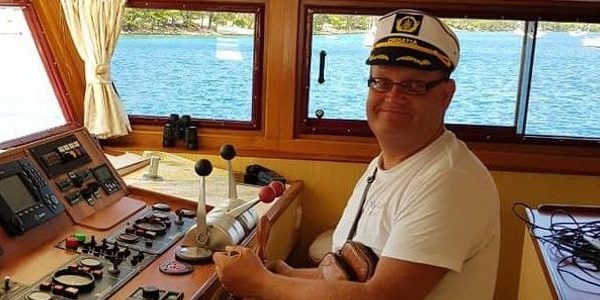 The Doctors Told This Man That He Would Soon Become Blind. He Sets Off On His Last Journey By Bike

Lukasz Lisowski is a Polish man. Once at the train station in Zagreb he saw a little confused man on a bicycle, to which a Polish flag was attached. Lukasz got acquainted with that stranger. The man’s story was so touching, that Lukash told about it to all his close people. Lukasz’s daughter-in-law Anamarija Tomaskovic has made post on her Facebook page. She told about an amazing man who went on his 700 km dream journey by bicycle, despite his health problems and lack of money.

The man’s name is Marcin Zarnecki. He lives in the Polish town of Nowy Targ. From his birth Marcin suffers from retinopathy – desease effecting retina of the eyeball. At present, one of his eyes can’t see, and the second one only sees 50 percent. Recently the doctors told Marcin that in a few weeks he would completely go blind.

After the doctor’s prognosis, Marcin did not fall into depression, but he decided not to waste time in vain and realize his dream, which was to see the Adriatic Sea for the last time.

Marcin did not have the money to buy a plane or train ticket, so he decided to travel by bike.

A long distance to Croatia and almost complete blindness did not stop the man on his way to the goal.

Such a journey would not be easy even for a healthy person. It took Marcin a lot of courage and perseverance to overcome this distance.

In the distance Marcin is able to see only the contours of objects, so he did not risk taking the main road. When the man noticed a road sign, he had to stop, come closer to see what was depicted on it.

The road to Croatia was not easy, and it took the man 2 weeks to get there.

Marcin often communicated with people who he met on the road. Soon many residents of Croatia learned his story. They were touched that the man sleeps in a tent. Anamarija’s family invited him to their house. Local media also got involved. Together, they were able to raise funds for Marcin. That money was enough to pay for a normal vacation for Marcin, including visiting the national park “Plitvice Lakes” and a ticket home.

Thus Marcin was able to fulfill his old dream – to visit the Adriatic Sea.

The people who met Marcin were amazed by the strength of his spirit, his love for life and his openness. And Marcin himself was surprised that there are so many kind people in the world who could help him.

Marcin tries to live a full life. Several years ago he learned to draw In the Academy of Fine Arts. His works were even exhibited in the city museum in Munich.

Marcin also graduated from music school and knows how to play the Haida – Balkan version of bagpipes. Marcin admits that it was very difficult for him to find a job, because of his illness. Now he performs in musical groups. Marcin planned a concert in the capital of Poland immediately after the trip.

How often do we postpone the realization of our dreams for later? We come up with convincing excuses: there is no money, health or time. The story of Marcin proves that one must live today and strive for their dream. Because “tomorrow” can no longer be.