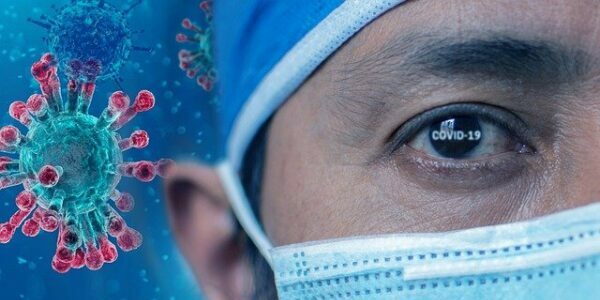 Jon Rappoport consistently provides some of the most detailed and incisive information regarding the fraudulent narrative of the coronavirus. His research is unassailable.

From his blog of February 22:

This article is part of my current series on the COVID PCR test. These articles prove that the test is fatally flawed, gives rise to hugely inflated and false case numbers, which in turn lead to the unnecessary and brutal lockdowns.

Right from the horse’s mouth. Right from the man we’re told is the number-one COVID expert in the nation. What Fauci says is golden truth.

Well, how about THIS?

July 16, 2020, podcast, “This Week In Virology”: Tony Fauci makes a point of saying the PCR COVID test is useless and misleading when the test is run at “35 cycles or higher.” A positive result, indicating infection, cannot be accepted or believed.

Here, in techno-speak, is an excerpt from Fauci’s key quote (starting at the 3m50s mark):

Each “cycle” of the test is a quantum leap in amplification and magnification of the test specimen taken from the patient.

Too many cycles, and the test will turn up all sorts of irrelevant material that will be wrongly interpreted as relevant.

What Fauci failed to say on the video is: the FDA, which authorizes the test for public use, recommends the test should be run up to 40 cycles. Not 35.

Therefore, all labs in the US that follow the FDA guideline are knowingly or unknowingly participating in fraud. Fraud on a monstrous level, because…

Millions of Americans are being told they are infected with the virus on the basis of a false positive result, and…

The total number of COVID cases in America—which is based on the test—is a gross falsity.

The lockdowns and other restraining measures are based on these fraudulent case numbers.

Jon has another brilliant and damning report exposing the lies of the PCR tests from official literature in his blog of February 23. He concludes this report saying:

Translation: Don’t use the test as the exclusive basis for diagnosing a person with COVID. And yet, this is exactly what health authorities are doing all over the world. All positive tests must be reported to government agencies, and they are counted as COVID cases.

Those quotes, from official government and testing sources, torpedo the whole “scientific” basis of the test.

CONCLUSION: The PCR test is useless and deceptive. It provides de facto dictators the opportunity to cite “new case levels” and lock down populations, creating economic and human devastation.

RESIST, REBEL, PROTEST, OPEN UP THE ECONOMY ANY WHICH WAY YOU CAN.

Ladies and gentlemen, we have been had. This hoax was concocted for the purpose of world enslavement—especially targeting the United States, which is the leader of the free world. Before the likes of Bill Gates and his gaggle of globalists could achieve their goal of world domination, they needed to dismantle the Bill of Rights in the United States. And that is exactly what the Covid false narrative is doing.

You know—do you not?—that four months before the Covid “outbreak” began this month last year that Gates and Company had assembled on October 18, 2019, for an Event 201 “pandemic exercise” at the Pierre Hotel in New York, New York. The “exercise” was conducted by The Bill and Melinda Gates Foundation, The John Hopkins Center for Health Security and the World Economic Forum.

Again, this “pandemic exercise” took place a mere four months before the Covid pandemic was announced to the world as real in February 2020.

This is an all too familiar scenario.

For example, every time there is a major mass shooting in this country, federal law enforcement agencies conveniently conduct some sort of mass-shooting training exercise nearby shortly before the real mass shooting takes place.

And now that Joe Biden has announced his plans to enact draconian gun control measures that will utterly gut the Second Amendment, you can bet the farm that another mass shooting will soon take place to provide Biden and his goose-stepping lackeys in Congress the excuse to enact those measures.

Yes, I am saying it: The coronavirus scare was a calculated, pre-planned event. Bill Gates and Tony “Heil Hitler” Fauci (along with the rest of the criminal cabal that took part in this surreptitious medical “Reichstag fire”) are international gangsters, mass murderers and global tyrants.

And I’ll say it again: This devilish plot totally depended on Donald Trump being president. There is no way in this world that this scheme could have succeeded had Hillary Clinton been in the White House. Why not? Because it required that the pastors, churches and Christians go along with it. This they would not have done had Hillary been elected.

Donald Trump was the perfect Pied Piper to lead Christian America to its enslavement. That was his primary purpose for being put in office; and he accomplished his task magnificently. (Whether Trump performed his role wittingly or unwittingly, only he knows for sure. It doesn’t matter, however, because the results are the same.)

Trump was put in office to lull Christians into complete compliance (with the phony Covid narrative), and now Biden is put in office to shear the sheep by taking away their means of self defense while they are still drugged (with Fauci’s lies) and docile.

And Bill Gates: He was standing by with the perfect ploy.

“Skin for skin,” Satan said to God. “All that a man hath will he give for his life.” This was said about the righteous man Job. Satan was later proven wrong about Job. But as the majority of Christians have been fed a steady diet of ear-tickling, back-scratching, feel-good sermonettes for most of the past half-century, they lack the spiritual understanding and power to know how to live courageously in the face of fear and fell prostrate in front of the corona fraud like dominos.

Watch my message Why Christians Have Capitulated Their Convictions To The Coronavirus.

We are not talking about medical science here. The Covid narrative put forward by medical professionals (taking their lead from Anthony “Heil Hitler” Fauci and the CDC) are guilty of promoting “oppositions of science falsely so called.” (I Timothy 6:20 KJV)

The Covid narrative is false science attacking the Christian faith and heritage of America and the God-ordained Liberty principles enshrined in our Bill of Rights. I’ll say it more plainly: This is an all-out attack against our freedom.

And the source of this attack is not political or medical. These are but instruments in the hands of the real power. Jon Rappoport and many others have clearly shown the fraudulent science of the corona narrative.

This is an attack from “principalities . . . powers . . . the rulers of the darkness of this world, [and] spiritual wickedness in high places.” (Ephesians 6:12 KJV)

In other words, this is a spiritual attack, which means it will only be defeated by spiritual power.

I urge readers to watch the five messages that I delivered on one DVD entitled The Rise Of The Beast: Coronavirus And AntiChrist.

The propaganda and government overreach of the coronavirus is illustrative of the hideous damage being caused by C. I. Scofield’s false prophecy doctrines. These messages show how the evangelical church has lapsed into little more than a glorified special interest group (for Israel) and is unwittingly assisting the work of antichrist through these false prophecy teachings.

These five messages are a monumental wake-up call for evangelicals to cast off the complacency and deception associated with Scofield Zionism and respond to the clarion call of God to be the salt and light of our country before our liberties are totally destroyed and we are cast out and trodden under the boots of tyrants. (See Matthew 5:13 KJV)

Here are the titles of the five messages contained on this one DVD:

The Scofield Rapture: A False Escape From The Beast

The False Security Of The Beast

The Command To Resist The Beast

The Masks Of The Beast

The Marks Of The Beast

Dear reader, please understand: The Covid narrative is a cold, calculated, callused conspiracy against our Christian faith, our God-ordained liberties and our very way of life. The entire narrative is predicated on the PCR test, which is a complete fraud. And Fauci knew it all along.