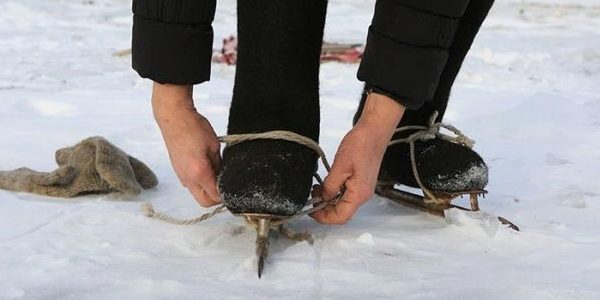 She Is 77 Years Old, But Every Day She Skates On Lake Baikal. The Story Of One Retired Woman From Siberia

Morehodova Lyubov Nikolayevna is 77-year-old retired woman from Siberia, Russia. Despite her venerable age, she easily tolerates the frosty weather of Siberia and surprises the whole world with her unusual hobby – skating.

Lyubov Nikolayevna lives in the remote village called Khaly, which is located on the shore of Lake Baikal in Olkhon region. The nearest settlement is 30 km away if you go there by land, but it’s only 4 km away if you ice skate through the lake.

This lady started skating at the age of 7, when she as other children from her village had to commute to school through the frozen lake.

Today seven decades have gone down but the woman still puts on her skates and skates on the Baikal ice to run her errands.

Lyubov Nikolaevna admits that she loves to ice skate long distances every day. When she is on skates, her back stops hurting and her mood improves.

Grandmother Luba does not have modern skates. Her skates were made back in 1943, but she does not want to replace them with modern models.

Several years ago husband of Lyubov Nikolaevna died. Today she lives alone, but does not feel herself lonely. This woman has a lot of animals, and every summer her grandchildren and nephews visit her.

In the cold season grandmom Luba makes a hole throgh the lake ice herself to collect water for animals. In summer, she takes water for herself and for her animals from the lake Baikal.

Relatives of grandmother Luba call her to move to the city, but the woman refuses to do it. Only on the lake Baikal she feels herself at home, it gives her a feeling of happiness and uplifting.