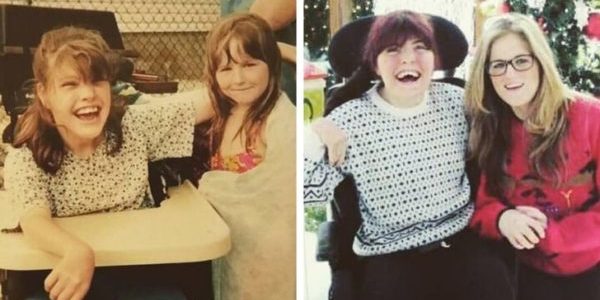 Every day there are a lot of changes in our world: people are moving around the world, buildings are being modernized, new inventions appear. But there are some things that are unchangeable. And they are the most important in our lives.

These spouses have been living together for 25 years. On the anniversary of their wedding they reproduced their memorable photo.

The dog has been wearing this sweater for 3 years. Now this thing is too small for him, but he still loves it.

On the left photo the man is pushing a baby carriage with his sons in it. On the right – he does the sam thing but with his grandchildren.

This little girl was photographed with a weird looking stranger. She did not expect, that 13 years later they would meet again at the same place.

The grandfather and his grandson at the same place, but 69 years later.

There are 10 years between these two photos of the mother and her daughter.

The father and son took a joint picture after a heavy snowfall in April. 35 Years later the same natural phenomenon happened, and the son duplicated the old photo but with with his child.

This man picked up a kitten on the street and brought him home. A year later the cat still likes to sleep on the shoulder of his savior.

The son is an exact copy of his father.

There are 30 years between these two pictures of the mother and daughter.

There are 20 years between these photos of two sisters.

These pets have matured, but still love to lie together on the couch.

The first photo was taken when the young man and girl were 6 years old kids. The second – 20 years later. During this time they created a family, and their daughter was born.

The father and son rephotographed one of the most favorite photos of the family archive.

The young man holds a photo of his father, who at the age of 17 also had long hair. It seems, that having long hair for men is a small tradition in this family.

This family members also have their own family habits.