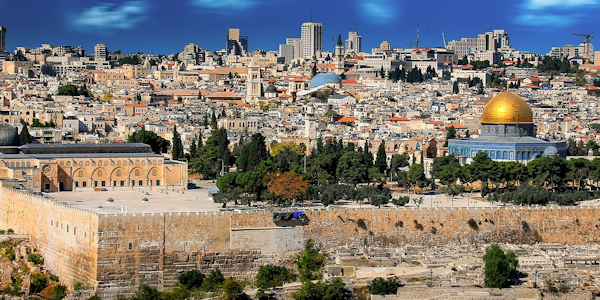 On the eve of His crucifixion at the belligerent behest of the Pharisees and Jews, the Lord Jesus Christ pronounced this prophecy upon the city of Jerusalem:

O Jerusalem, Jerusalem, thou that killest the prophets, and stonest them which are sent unto thee, how often would I have gathered thy children together, even as a hen gathereth her chickens under her wings, and ye would not! Behold, your house is left unto you desolate. (Matthew 23:37, 38 KJV)

Our Lord then spent the next chapter of Matthew’s Gospel (chapter 24) giving His disciples many of the details relating to Jerusalem’s impending destruction—which took place 37 years later exactly as He had predicted.

This Sunday, September 8, marks the anniversary of the conclusion of that great and final destruction prophesied by Jesus and fulfilled in 70 AD.

The destruction of Jerusalem in 70 AD marked the final end to the Jewish dispensation—along with its temple, its sacrifices, its city and its religion—and served as a mighty and miraculous introduction to the New, Better and Everlasting Covenant that Christ has given to all men through His death and resurrection.

God intended that the destruction of Jerusalem would serve as a monumentally important and eternal lesson for the Church. And for 1,800 years this lesson was clearly understood by Christians.

I am marking the anniversary of Jerusalem’s annihilation by offering the definitive book on the subject, The Destruction Of Jerusalem, written by British parliamentarian George Peter Holford in 1805. He describes the background, context and siege itself with vivid detail.

Drawing from the eyewitness testimonies of the great Jewish historian Josephus and others, Holford paints a literary picture of the destruction of Jerusalem that the reader will never forget. The subtitle of the book is An Absolute And Irresistible Proof Of The Divine Origin Of Christianity. And that’s exactly what the destruction of Jerusalem does: It provides an absolute proof of the divine origin of Christianity.

However, the writing of the Zionist-inspired Scofield Reference Bible at the turn of the twentieth century and the creation of the Zionist State of Israel in 1948 successfully obfuscated and all but obliterated the great Biblical truths regarding the destruction of Jerusalem in the minds of the vast majority of pastors and Christians today. The lack of scriptural understanding of this seismic event has led to several generations of Western Christians being steeped in ignorance and unbiblical understanding of all things Israel.

It is no hyperbole to say that as far as a host of modern Christians understands, it’s like hundreds of years of prophecies from the Hebrew prophets, the preaching of John the Baptist, the prophecies of Christ, the work of Christ on the Cross, His resurrection, the advent of the New Covenant and the destruction of Jerusalem—which totally and eternally buried the Old Covenant—NEVER HAPPENED.

A proper understanding of the destruction of Jerusalem is the key to unlocking our understanding of how God symbolized the abolishment of the Old Covenant and His gift of the New, Better and Everlasting Covenant. Ignorance of what God did when He destroyed the city of Jerusalem in 70 AD is a root cause of the vast (and often crazy) misinterpretations of prophetic Scriptures running rampant today.

When George Holford penned The Destruction Of Jerusalem, he wrote a masterpiece.

I truly believe this is one of the most important books ever written. It is truly a seminal work. No Christian should go without reading this phenomenally important book. And I dare say that Holford’s book is infinitely more important today than it was the day he wrote it. In 1805, the Church at large mostly understood the truths Holford presented in his book. In 2019, hardly anyone in the Church at large even remotely understands these truths.

Enthusiastically, I recommend and URGE readers to order this incredibly important book, The Destruction Of Jerusalem, by George Peter Holford.

Now, don’t miss this: On August 25, I delivered a message by the same title, The Destruction Of Jerusalem. I regard this message as one of the most important and powerful messages I have ever delivered.

Plus, this message caps over 10 years of study and 5 years of oral presentations regarding the true Biblical teaching of Israel. This effort has resulted in 15 DVDs containing 22 unique messages under the titles:

The Israel Package – Set One

My message The Destruction Of Jerusalem is included in Set Two.

If you want to order my message The Destruction Of Jerusalem by itself, go HERE.

My message containing the information alluded to above regarding John the Baptist’s prophecy of Jerusalem’s destruction is found in Set One.

I am convinced that knowing the information in the above messages is required BEFORE any study of prophecy can commence. Prophecy does NOT stand alone. It is built, not on any private interpretation, but upon solid Biblical foundations—foundations that are laid in the series of messages listed above.

Many of you have followed my work for years or even decades. Many of you are new to it. Either way, these are the messages I URGE you to get and digest. This is THE BOOK I urge you to read. This material will bring you up to speed on what the Lord has been teaching me out of His Word regarding the TRUTH ABOUT ISRAEL.

Those of you who have heard me on Israeli News Live, Know More News, We Hold These Truths, The Ted Broer Show, Geoengineering Watch, Hagmann & Hagmann, etc., these are the messages and this is THE BOOK that will explain the scriptural truths that convinced me that almost everything I had been taught about Israel and Bible prophecy was blatantly unscriptural. These are the messages and THE BOOK that will give you the concrete Biblical foundation to understand true Bible prophecy as we go forward.

Here is my DVD message, The Destruction Of Jerusalem.

Here are the two complete sets of my messages on the truth about Israel:

The Israel Package – Set One

Knowing the truth really does set us free. I’ve never known such liberty as I’ve experienced since God revealed to me the truth about Israel. I truly believe if you will watch all of these messages and read Holford’s book, you, too, will find a spiritual freedom you have never known.

More from FAITHMore posts in FAITH »