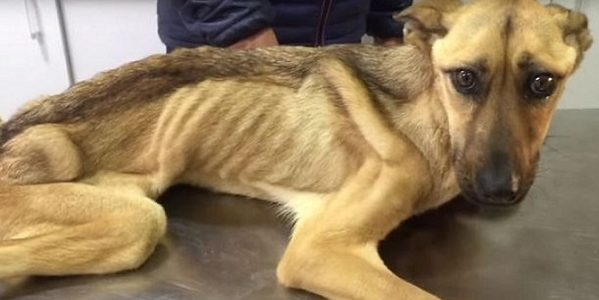 Just A Few Weeks Ago, This Exhausted Dog Could Not Even Stand! Find Out What Changed Her Life

This dog was taken to the rescue center in Granada, Spain in a state of extreme exhaustion. Her bones stood out against the skin, and her organs could stop functioning at any time. The dog was so weak that she could not stand and move on her own, she was only able to slightly raise her head and waggle her tail.

Rescuers have given the nickname of Barilla to the dog because the animal was thin as spaghetti.

Eduardo Rodriguez, the owner of a rescue center, said: “I’ve been rescuing dogs since I was a child and I’m used to seeing them in a bad way but I’ve never seen an animal in such a terrible state as Barilla”.

It took the vet seven weeks to restore the health of the dog. Today Barilla is a cheerful dog that has a loving owner, which means that all her troubles were in the distant past.

First it was hard for the vet to tell whether the dog would be able to survive or not.

Barilla’s weight did not exceed 7kg. The dog was attached to an IV, but her organs could stop working at any time.

Barilla did not have muscle mass at all. As soon as Eduardo Rodriguez saw Barilla, he set a goal to save the animal!

The vet said that Barilla would not have survive one more day on the street.

The dog was so weak that she had to eat lying down. Even after a week, when Barilla gained 4 kg of weight, she could not walk.

After 7 weeks it’s hard to recognize Barilla! It is a different dog!

“The vet said several times that…most normal dogs would have died. We’re inseparable now… The first day I saw her I told my colleagues I was going to keep her and that’s the way it’s been.”- said Eduardo Rodriguez.