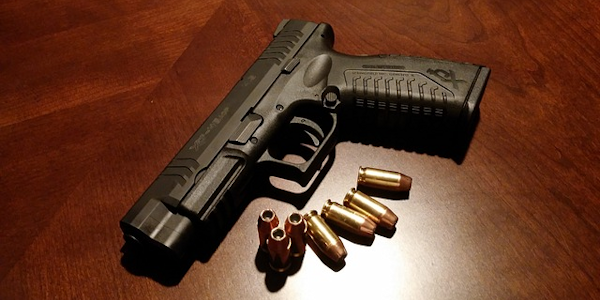 This column is an unapologetic appeal to action.

In 2016, Donald Trump said, “I could stand in the middle of 5th Avenue and shoot somebody, and I wouldn’t lose any voters.” He must still believe that, because after promising his supporters that he will protect the 2nd Amendment, he is right now in the process of enacting most of the Democrats’ ANTI-2nd Amendment agenda.

1. A complete ban on semi-automatic rifles

4. Mandating universal background checks (which would make ALL private sales illegal, including the transfer of a gun from father to son)

5. Implementing national “red flag” gun confiscation laws (which is totalitarian to its core—making a person guilty until proven innocent and beginning the process of despotic gun confiscation nationwide)

PLEASE WATCH MY VIDEO LETTER TO OUR LEGISLATORS, JUDGES AND LAWMEN REGARDING “RED FLAG” LAWS ON MY YOUTUBE CHANNEL.

And if you think that “red flag” gun confiscation laws don’t affect you, think again. The FBI has just recently stated that if you believe in conspiracy theories, you are a “domestic terrorist threat.” That statement is from an FBI intelligence bulletin from the bureau’s Phoenix field office, dated May 30, 2019. That FBI designation alone could very easily precipitate a “red flag” gun confiscation order being rendered against you.

And Donald Trump is now the loudest voice demanding that “red flag” gun confiscation laws be enacted. He is even using his daughter, Ivanka, to lobby congressmen and senators to pass these gun control measures.

Yes, of those 5 Democrat gun control agendas (including “red flag” gun confiscation laws), Trump is supporting—and PUSHING—4 of them. The only one he’s not pushing YET is the ban on semi-automatics.

George Bush 1 lost his bid for re-election because he broke his promise when he said, “Read my lips: No new taxes” and then turned around and signed massive tax increases upon the American people.

Donald Trump’s “read my lips” promise was his promise to protect the 2nd Amendment.

This battle is going to be won or lost in the U.S. Senate. Trump says he has enough influence over the GOP-controlled Senate to pass these gun control measures. Majority Leader Mitch McConnell is saying the same thing—so are Republican gun grabbers Lindsey Graham and Marco Rubio.

If conservatives do not arise EN MASSE NOW and send Donald Trump the loudest and clearest message that if he enacts these gun control proposals, he will NOT receive their vote next year, America will be saddled with more communistic gun control laws than any president has enacted since Lyndon Baines Johnson in the 1960s.

THIS IS DEADLY SERIOUS!

I urge everyone reading this column to contact your two U.S. senators and tell them in the strongest terms that they cannot support these gun control measures without losing your vote FOREVER. And tell Mr. Trump the same thing. And get every friend you can to do the same thing.

The NRA is compromised and is in complete disarray and will be of little help in this fight. It’s up to us. It’s up to the people who elected Donald Trump to stop this madness.

If we allow Donald Trump to enact these egregious gun control and gun confiscation measures on America, we may as well have elected Hillary Clinton. If Donald Trump cannot keep his promise to protect the 2nd Amendment, the people of America who voted for him CANNOT continue to support him. There can be NO MORE EXCUSES.

But this is not about winning or losing an election. This is about preserving our God-given right to keep and bear arms. And that right is more important than Donald Trump or Joe Biden or ANY politician or ANY election.

Without the right to keep and bear arms, we don’t even need elections.