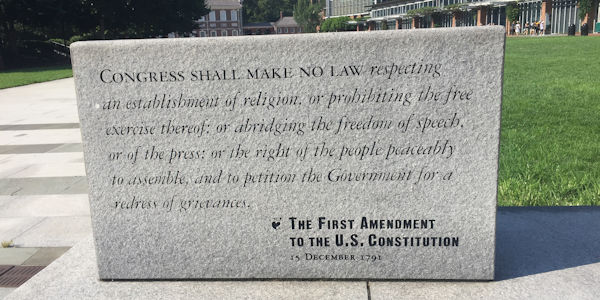 I told you this would happen. No one is to be allowed to speak against the official explanations: https://www.rt.com/usa/506751-biden-propagandist-anti-free-speech/

“All speech is not equal,” declared Biden transition leader Richard Stengal, a former presstitute for MSNBC.

“Truth” is reserved for what serves the anti-white leftwing of the Democrat Party, the allied military/security complex and global elite. This means that no Trump supporter  speaks the truth and his/her hate speech must be silenced. Keith Olbermann’s demand for the arrest of President Trump and Tucker Carlson of Fox News is the beginning. https://www.washingtonexaminer.com/news/keith-olbermann-calls-for-the-arrests-of-trump-and-tucker-carlson

The vote theft is the opening gun of a civil war in which white Americans will have to fight or be relegated to third class citizens. The 14th amendment is also dead. Trump Deplorables are no longer equal under the law.  They are denied free speech, but all others have free speech to denounce white America more harshly than Nazis are reported to have denounced Jews. Antifa and Black Lives Matter have begun the Kristallnachts. Those who tell the truth are losing the protection of the US Constitution.  Only liars are protected.

The obviously stolen election is a coup against democracy and America. If the American legal system fails to stand up to a stolen election, unless white Americans submit to third class status, violence is our future.