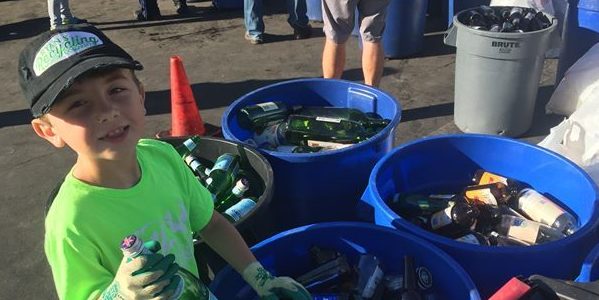 7-Year-Old Boy Was Able To Earn Money For College, Doing His Favorite Thing

Ryan Hickman is only 7 years old, but he knows well what he will do when he grows up. The chosen occupation already brought about 10 thousand dollars to the young businessman.

It all started four years ago, when his father took 3-year-old Ryan to the waste recycling center, where he was bringing the garbage. Ryan’s father still remembers with what delight little Ryan was throwing bottles at the receiver, and how happy he was to get two dollars for that.

After returning home, 3-year-old Ryan expressed his desire to sort out his things. The boy found the unnecessary among his belongings and the family things, and then he told his parents that he also wanted to sort the neighbor’s garbage and bring their things to recycling center. In order to make the dream of their beloved son true, Ryan’s parents gave garbage bags to all their neighbors.

Since that day 4 years have passed. During this time, Ryan managed to create his own company Ryan’s Recycling. Today Ryan and his parents take garbage from forty permanent clients, then sort it in 8 containers in their backyard and take it to the processing center.

Since founding of Ryan’s Recycling, more than 22 tons of garbage have been recycled, as well as 200 thousand cans and bottles. The district managed to earn about 10 thousand dollars, this money Ryan’s family is saving for his future college.

Ryan donated more than $ 1600 to charity and became a young ambassador of the Pacific Marine Mammal Center. He even designed special T-shirts for that charity with the logo of his company.

In 2018 Ryan spoke at the charity evening WE Day in California. This annual event is organized by the international fund Free the Children, which assists children and adolescents around the world. In particular, this fund is financially engaged in construction of schools and development of the poor regions of the world, providing drinking water and nutrition.

Ryan’s story is an excellent example proving that any dream can become a reality!